We'll be using both the traditional chronology and newer chronologies proposed by use of both the oracle bones and the Xia-Shang-Zhou Chronology Project. I'll provide the data side-by-side below and discuss the rulers themselves at some length. Let's begin with some preliminary comparison of the separate dating systems used to arrive at a regnal timeline. I'm going to use the XSZCP's terminology to break the Shang into two periods: the Early Shang and the Late Shang. I'll discuss the split point later on.

In this post, we'll focus on the Early Shang - defined here and elsewhere as all leaders before Pán Gēng. Here's a raw comparison of the traditional chronology versus the XSZCP:

Sorry for any readability issues - I'm learning how to make pretty looking graphics as I do this - but this should give a general sense for the discrepancy between the two dating systems. You'll notice that the XSZCP doesn't include different rulers, whereas the TC does. This comes down, largely, to the fact that it was impossible for them to find specific evidence of rulers before a certain point during their work. That being said, here's a breakdown of that Early Shang period as per the traditional chronology, complete with the names of the rulers beside their reigns. After that, we'll go through each one in some detail to give you some additional flavor.

The Shang Dynasty itself lasted for quite a long while. With a total length of around six centuries and, depending on your source, over thirty rulers, the Shang remained in power well over a century longer than the Xia. Let's check out a timeline including every single ruler (the names have been stripped for readability):

It looks so pretty! It's also pretty difficult to see where some of the rulers end and others begin, while others are clearly delineated. This is merely a result of some rulers having ruled for a long time while others didn't rule very long at all.

I'm going to say that's enough random graphics prior to our actual discussion on the Shang, so let's go ahead and dive in.

We'll dive right into our discussion. The Shang are the second of three ruling states of the Three Dynasties period, which should not be confused with the much later Three Kingdoms period. So, just to give a sense of what's going on in the world at the beginning of the Shang, we'll turn to the records of the Grand Historian once again:

Jie of Xia did not strive after virtue, and the wars injured the people. Unable to endure their wrongs they summoned Tang to their aid, but he was imprisoned in the tower of Xia; being afterwards released. Tang cultivated virtue, and the princes all went over to him, so Tang led an army to attack Jie of Xia. Jie fled to Mingtiao, and was eventually driven out and slain. Jie observed to someone, 'I regret that I did not take the opportunity of killing Tang in the tower of Xia, and then I should not have been brought to such a pass.' Tang, being seated on the Imperial throne, superseded Xia, and gave audience to the people. Tang enfeoffed the descendants of the Xias. Until the time of the Zhou dynasty they held the principality of Qi.

Jie was the last ruler of the Xia. Here he is depicted in a relief from a family shrine in Jiaxiang, Shandong:

It's a little hard to see what's going on in this, but I'll give you the explanation you can find on Wikipedia - he's carrying a halberd, a symbol of oppression, and he's sitting on two women, which shows that he abused his power. The fact that he was such a bad king that he's memorialized as unbelievably awful in stone carvings is wonderful. Let's talk about that man, Tang, who is mentioned in the above text. 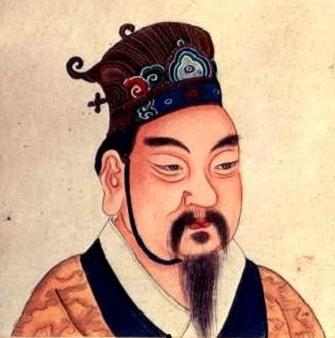 As the Records of the Grand Historian relates, Jie was apparently disliked by the people so much that they asked a nearby lord to come and take care of the problem. It should be noted that the Xia were what is called a suzerainty - basically, a ruling state allows its vassal states to exist semi-autonomously within the bounds of the larger empire. Chéng Tāng was the ruler of one of these semi-autonomous states. He overthrew Jie and turned the remaining Xia into a vassal state of his empire. In so doing, he became the first ruler of the new Shang Dynasty. His rule is remembered as being a pretty good one.

As part of the ongoing data collection I'm doing for this series, I'm going to start recording where the capital was during the reign of the different rulers - this will, hopefully, translate to some pretty cool maps down the line. I will attempt to add boundaries for the dynasty when appropriate as well. In that spirit, here's where that capital supposedly was: 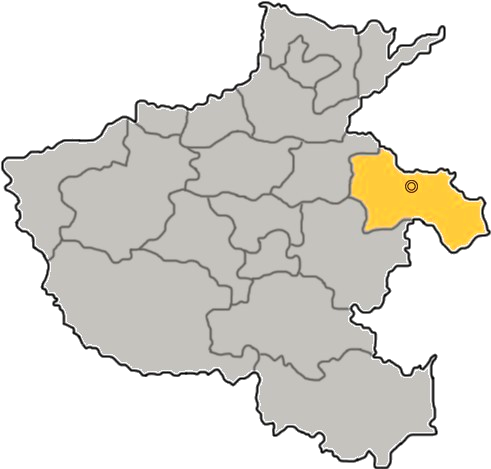 The capital itself was called Bo. It's where the modern day city Shangqiu is within the eastern Henan province. Fun fact: Bo was actually the capital before, as three legendary emperors (Shennong, Zhanxu and Ku) lived there according to the mythologies of the Three Sovereigns and Five Emperors. Emperor Ku's son Qi, who helped Yu the great with the flooding problems, was given control of this area and it was named Shang. Qi is the primal ancestor of the legendary Shang people.

Thats enough about him. Let's go on to the next ruler.

Wai Bing, also known by his posthumous name Bu Bing, was not a long-lived ruler. In fact, he only ruled for two years before dying. I don't know very much about him because he apparently wasn't all that important. The only noteworthy historical fact about this ruler is that if the oracle bones are to be taken seriously, he was not the second ruler, instead the fourth. I wish there was more information for me to give you all on this guy, but there simply isn't.

Zhong Ren was the third ruler of the Shang as per Sima Qian. The oracle bones do not list him as a ruler in any fashion. Regardless, he ruled for four years before dying. He, again, was not particularly influential or important. He was the son of Chéng Tāng and the younger brother of Wài Bǐng.

Tai Jia was the next ruler in line. He was the nephew of Wài Bing and the grandson of Chéng Tāng. His rule was at first marked by being especially terrible - so much so that his advisor, Yi Yin, kicked him out. Depending on the account you trust (either Sima Qian or the Bamboo Annals) he was either welcomed back by Yi Yin or overthrew him years after Yi Yin's initial coup. Either way, he was gone from the capital for some time and eventually made his way back. After his adventures outside of the capital, he was a much better ruler. There is evidence that suggests he was still revered by the Shang people hundreds of years after his death, so it seems he didn't end up that badly.

Wo Dīng is another ruler we know very little about - he either ruled twenty-nine or nineteen years depending on your source. Apologies on the lack of information for many of these guys - we'll get into some meatier stuff as time progresses.

Xiǎo Jia ruled for seventeen years according to Sima Qian.

Yōng Ji ruled for twelve years according to Sima Qian.

Tài Wù ruled for seventy-five years according to Sima Qian. In the seventh year of his reign, a mulberry tree and millet bush were found growing together in his palace. He had some interesting dalliances with the queen of West Rong, where they both sent ambassadors to one another. I'm not sure why this particular fact is included by Sima Qian, but it was. Given that he reigned for seventy-five years and a great crop was apparently had during the forty-sixth year of his reign, it couldn't have been too bad.

Zhòng Dīng was the next ruler, and he was the son of Tài Wù. He ruled for thirteen years. He attacked the Blue Barbarians (蓝夷) in the sixth year of his reign. The capital was moved to Ao, which is so close to modern-day Zhengzhou that excavation efforts have been impeded by modern buildings. Here's that location: 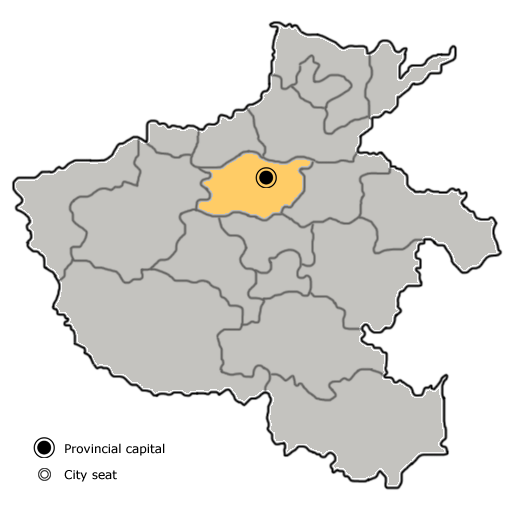 Wài Rén, brother of Zhòng Dīng, was the next ruler. He ruled for fifteen years. He had to deal with some rebellions within their vassal states - namely, the Pei and Xian peoples. The Bamboo Annals claim that his rule was only ten years, but why would we trust them?

Hé Dan Jia was the next ruler in line, son of Wài Rén. He ruled for nine years. In the first rule of his reign, he moved the capital to Xiang, an ancient city close to modern day Anyang. Here's a map to give you some sense of where that is: 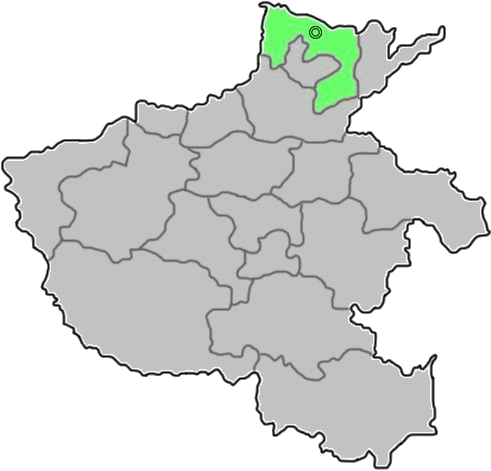 If it isn't clear by now, they're doing a lot of moving around. That map isn't an exact location, as I've not got the particular coordinates nor do I have the time/skill to become a mapper right now, but I'll get to that when I can. Consider this a placeholder. There will likely be an entire post devoted to mapping the movements of the capital over time.

In the third year of his reign, he defeated the Pei people who had rebelled against his father. Your father is definitely smiling upon you, Hé Dan Jia.

Zu Yi, son of Hé Dan Jia, ruled for nineteen years. During this time, he changed the capital twice and wrote a book. The first change of capital moved us to Geng, and the second moved us to Bi. Here's where they were, generally speaking:

Zu Xīn, son of Zu Yi, ruled for sixteen years. His capital was also in Bi, so he didn't move it like the last few have decided to do. I guess the charm wore off. Don't worry, it'll be moved a lot more in the future. He was totally unremarkable, other than being the ruler of the most powerful dynasty at the time.

Wo Jia, brother of Zu Xīn, ruled for twenty-five years. Somehow, in all that time, he did nothing important enough to be noted by the Grand Historian. I'm sure I'm missing some awesome story here, and I'd love to have my readers fill in the blanks for me. He kept the capital in Bi.

Zu Dīng, nephew of Wo Jia, ruled for thirty-two years and was extremely boring. This is so disappointing. If you think you're disappointed reading a veritable catalog of ships, think how bad it is for me to research it and find that someone who ruled for thirty-two years did so little that only their name, birthplace, and reign length was recorded. Ah, well. He stayed in Bi. 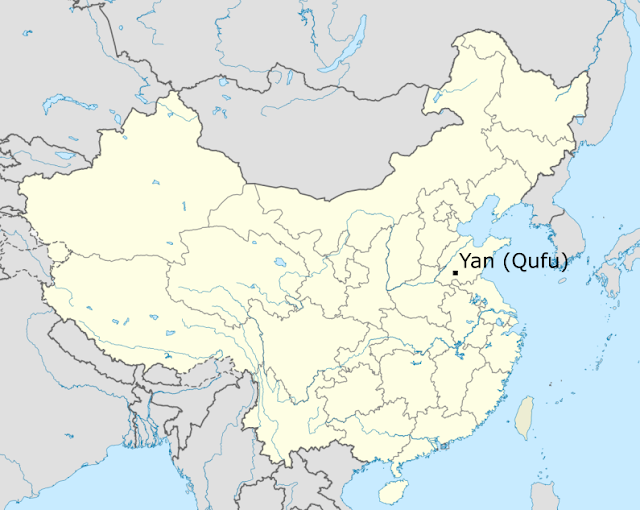 Yan is basically modern day Qufu, which is in Shandong province.

Yáng Jia also was boring, didn't move his capital, or really do anything of note. That being said, he succeeded his cousin Nán Gēng and ruled for seven years.

This post was long in coming and still needs some polish, and I apologize for that upfront. That being said, if I hadn't gotten it out now I wouldn't have gotten it out for at least another month as I am about to go on vacation to China for the first time in my life. I'm extremely excited and hope to find some good material to write about while I'm there.

After a few intermediate posts, I'll come back to this series with the Late Shang (the historically verifiable post) and we will continue forward in time. All the best to anyone reading this, and thank you for supporting my work.
at July 10, 2018 No comments: